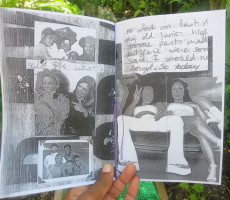 Each year, as part of the Center’s Artist-in-Residence Workspace Grant program, up to five New York-based emerging artists are offered space, time and support to explore the production and exhibition of artists’ books and related work in year-long residencies. The purpose of this program is to promote experimentation in making book art by artists representing a diversity of fields and backgrounds.

In 2014, Damali Abrams, Emmy Catedral, Heidi Lau, Eto Otitigbe, and Seldon Yuan were selected as artists-in-residence. This group show will feature the work completed by these artists last year at the Center.

Damali Abrams’ work is a commentary on, and a contribution to, contemporary culture. Abrams uses personal narrative as a point of departure for addressing larger sociopolitical concerns. Using herself as a medium, Abrams documents the moment through blogging, webcam, video diaries, and journaling.

Emmy Catedral’s collection of objects represent an examination of human cosmologies: personal attempts and failures at measuring space and explaining the universe from the point of view of a terrestrial being. For example, a scattered walkable floor puzzle on slate tiles is also a log of drawings: sky observations using a smartphone app to view the stars existing underfoot, on the other side of the Earth.

Heidi Lau creates an alternate world by excavating fragmented narratives from personal and collective memories, highlighting the archaic and invisible, and recreating what has been lost to natural and human causes. Lau grew up in a colony of Portugal during its transition into a Chinese province, and much of her work is inspired by memories of colonial houses and monuments left to decay, succombing to strange and wild plants.

Eto Otitigbe is a polymedia artist whose practice investigates issues of race, technology, politics, and shared experiences. His projects can be experienced as a creative protest, a cultural artifact, or sculptural intervention. Otitigbe uses his creative practice to construct knowledge constellations that chart his identity and experiences: Nigerian-American-Artist-Engineer-DJ, to name a few.

Seldon Yuan’s work is based on a personal history, under the influence of poetry, extending across a spectrum of optical effects, absurdity, poetry, surrealism, ideas about language, and familiar objects and spaces. His work typically creates a filter between a common object or environment/scene and the viewer, thereby inventing a lens to view and reinterpret the everyday metaphorically. 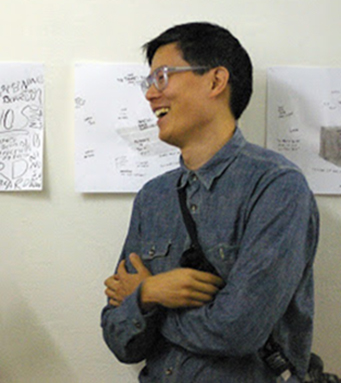