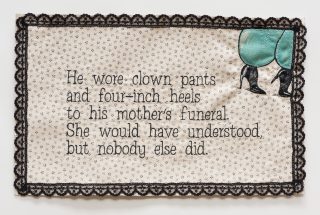 Time Traveler features recent books, broadsides, and text-based drawings produced in thread and fabric using an industrial sewing machine and a computerized embroidery machine. Marks’ artworks depict a present time that is profoundly informed by the past, often re-imagined, and also includes fantasies of the future.

China Marks’s books and drawings depict a present time that is profoundly informed by the past, often re-imagined, one that includes fantasies of the
future. She moves so fluidly among these time zones, all the way into pure myth and back again, while generating a seemingly endless stream of narrative drawings, books, and variously proscriptive and descriptive broadsides, that we are compelled to follow. China Marks believes, as William Faulkner wrote, that “The past isn’t dead. It isn’t even past.”

This exhibition includes books, drawings and broadsides that show her creative conflation of the past and the present. In 2008, she constructed the wordless Book of Horses, full of myth, history, and humor, showing horses in landscapes alongside horse/human hybrids and other fantastic creatures. To make her 2011 altered book, Weirdsville, her only work on paper in the last eight years, she used paper-based collage and text that she wrote and printed out to turn a book of b/w photographs of Washington lobbyists into a description of what was in effect a ghetto for people considered too odd live elsewhere and invites us to stare at them. In 2014, her first accordion-style book, Where Duppies Dance with the Damned, updating Dante, offers a tour of a grim 21 st century version of Hell, shot through with political, psychological, historical, and literary references.

Since the fall of 2014, China has been working on an on-going series of drawings on contemporary tapestry copies of 14-19 th Century paintings, variously collaging and sewing into them, subverting both imagery and narrative, and writing dialogue and commentary which she embroiders and attaches. She calls her finished drawings “altered paintings,” which does not make clear how much has already been done to them before she ever lays a hand on them: that they have been badly copied, cropped, edited, coarsely decorated, and finally woven pixelated on digital looms. In effect, just like the rest of our history, they have been massively and repeatedly interfered with. In fact, that is what drew her to them.

Accordingly, in 2016 she created a book from four identical small tapestry copies of Bellini’s Pieta by adding dialogue and changing each tapestry in ways that made one follow another like beasts of burden harnessed together, page after page…

China Marks earned a B.F.A. in Sculpture from the Kansas City Art Institute and an M.F.A. in Sculpture from Washington University in St. Louis. She lives and makes art in Long Island City, NY, making process-directed drawings and one-of-a-kind books. She has received numerous grants and fellowships, most recently a 2011 fellowship from the New York Foundation for the Arts, which also named her a Gregory Millard Fellow. China Marks has been featured in exhibitions at Asian American Arts Centre, NYC; The Jersey City Museum, NJ; Arkansas Arts Center, AR; Bergen Museum of Art and Sciences, NJ; Montclair Art Museum, NJ; Kansas City Art Institute, MO;  Queens Museum of Art, NYC; and Contemporary Craft Museum, OR, among other places.

Process is the transformative agent, synthesizing and subverting the forms and stories contained in the original sources. Since November of 2010, Marks has been working on a series of drawings that incorporates artist-generated text and imagery, creating dramatic narratives. While profoundly influenced by the books she has read, journals kept, and her own one-of-a-kind books, these drawings offer an entirely different way of telling stories.

1/9
Your cart is empty.
Checkout