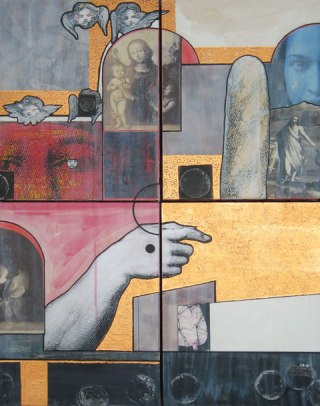 “I work with the book. It is my chosen medium for the simple fact that it can contain and embrace all artistic media and expressions. Within the book, an infinitely complex array of materials and techniques come together and combine with a history as rich and diverse as we who create and use it. I often refer to the book in its totality as Alchemy.”    – Mark Cockram

This exhibition encompasses examples of Cockram’s recent production in which he has been exploring the more creative side of bookbinding and the wider field of book arts.  He has been given the opportunity to work with some fantastic text blocks provided by understanding and adventurous collectors. The creative bindings he makes push him technically and artistically to maintain a balance between reflecting the visual and literary content of each book, while expressing himself as a contemporary artist.

Mark’s books tend to be multi-dimensional, offering plenty of visual and physical texture and a variety of display opportunities. He often creates extended book sculptures and formats, expanding on the codex form without compromising the functionality of the book itself. His books are meant to be read and handled. Throughout his career, Mark has enjoyed working with collage and bricolage and has increasingly brought that to his bindings, employing layering techniques, using found objects, non-traditional materials, and unconventional structures. In his most recent work he is exploring how he can use the book structure as a vehicle for aspects of his artistic life and output that people may not be aware of. Thus, his current fascination with the total, complete or artist’s book.

Mark Cockram has been a professional bookbinder, book artist, and teacher for over 25 years. After studying art and design at Lincolnshire College of Art (1982-84), Cockram worked as a freelance artist and designer. He discovered his passion for bookbinding and book arts whilst working in Paris. After graduating from the fine bookbinding and conservation course at Guildford College of Technology (1990-92), he went on to study Japanese and French bookbinding and related subjects at Studio Livre (Tokyo) and London College of Printing (BA (Hons) Book Arts and Crafts, 2000-2002). Cockram opened his first bookbinding studio in Lincoln in 1992. He opened Studio Five in London in 2003. He teaches various aspects of bookbinding and related book arts at home in Studio Five and elsewhere in the UK, Europe, and Asia. His diverse work is represented in public and private collections around the world, including The National Art Library at the Victoria and Albert Museum, the Library of Congress, the British Library, and The Grolier Club (New York).