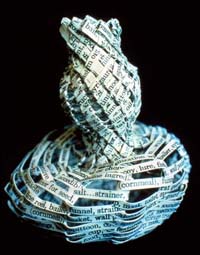 An Exhibition of Artist’s books from Southern California

Out West II showcases diverse artists from Southern California who are making a distinct contribution to the book as an art form. The exhibit features works that resemble books in form but push the limits of what we might consider to be a book. The concepts of structure, deconstruction, poetry-in-motion and imagery have been explored through themes that range from the urban environment to the kinetic rhythm of flipping pages. A range of documented forms such as the scroll, clay tablet, girdle book, pop-ups, and a variety of media including pen and ink, photography, collage, xerography, prints, paint, wood, clay and metal are used to create these diverse works.

Southern California has a long tradition in artist’s books. The influence of the Fluxus movement in the fifties and sixties spurred local artists on the road to an involvement with the medium, When Ed Rusha’s “26 Gasoline Stations” (1963) introduced the unique concept of the book as an art form, many books followed and the book store at the Pasadena Art Museum was selling Rusha’s artist’s books along with those of John Baldessari, Guy Du Cointet, Suzanne Lacey and others, who were creating this accessible art form. The Woman’s Graphic Center in LA was producing artist’s books, offering classes and attracting artists such as Susan King and Mariona Barkus. Institutions such as Scripps College in Claremont, the Athaneum in La Jolla, the special collections libraries at the Getty Museum, UCLA, UCSD are among many involved in the book arts field. Judith Hoffberg, publisher of “Umbrella ” magazine has been a guiding light for the medium. Harry Reese of “Turkey Press” in Santa Barbara has been a leading figure and has been teaching book arts at UC-Santa Barbara for many years. This is a thriving, active community of book artists, producing uniques and multiple books and contributing to the richness of the southern California scene.

My choice of books are a collective biography of a time and place of which I have become part. The theme of the exhibition is diversity…visual and intellectual.

I have included various structural and visual books, eliminating seductive craft cuteness, instead emphasizing the integrity of the individual pieces.

The future? I see artist books becoming more sculptural, more wall oriented. The fine press publishers will experiment further in developmental imagery and structure and a few book galleries will come and go according to the marketplace. Public spaces and centers such as the New York Center for the Book will have to be the guardians of this form of art, teaching,
exhibiting work, encouraging and providing education to an audience that appreciates this art form.

The exhibition will be on view at CBA until the end of December and will then travel to the Special Collections, J. Willard Marriot Library, Univeristy of Utah, to be shown from April 4 through May 18. 2002.