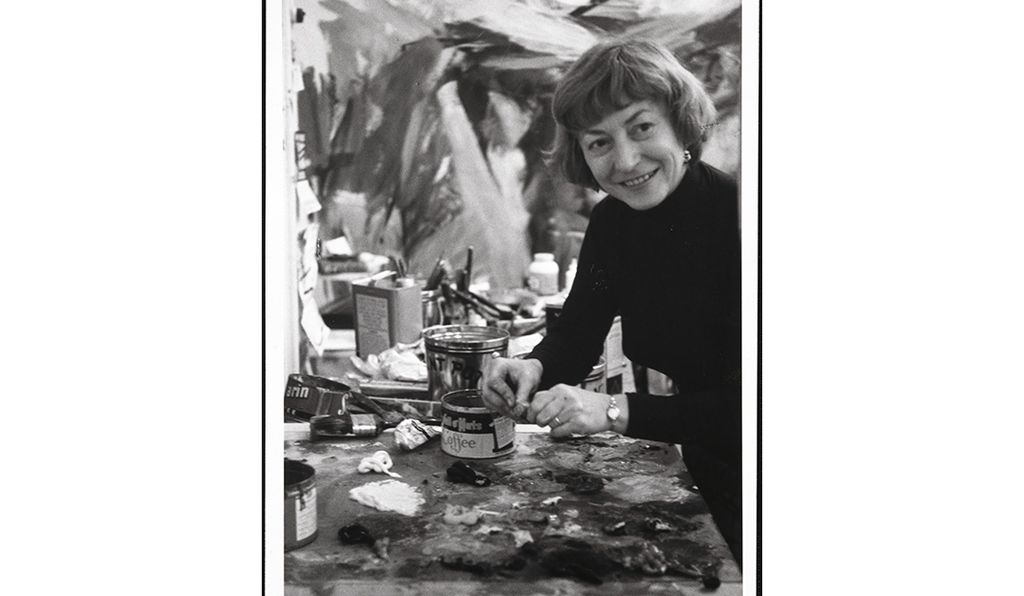 Elaine de Kooning was born in Brooklyn, New York on March 12, 1918. Her introduction to art began at an early age when her mother took her to the Metropolitan Museum and by the age of 8, she was creating and selling portraits of her friends. de Kooning attended Hunter College, the American Artist School, and the Leonardo da Vinci Art School where she honed her skills. Early in her career, de Kooning became well known in the New York City art world and was a member of the Eighth Street Club. In 1938, she was introduced to William de Kooning who would become her husband in 1943. The two worked together and William also gave Elaine drawing lessons. Both were immersed in the NYC Abstract Expressionism scene at the time and often met up to discuss art with other New York based artists. Knowing how talented her husband was, Elaine worked towards helping William’s career in addition to furthering her own. Eliane and William separated in 1957 and Elaine took up short-term teaching positions at the University of New Mexico, the University of California, Carnegie Mellon, Pratt, Yale, RISDI, New York Studio School in Paris, and others. In addition to painting, de Kooning was an art critic and often wrote pieces for various publications.

de Kooning is well known for how she combined Abstract Expressionism with portraits. Instead of making the portraits completely abstract, she worked to merge abstract qualities with the figures. This can be seen in her desire to focus more on the character in the painting instead of the chosen style. One of her most well known paintings is a portrait of US President John F Kennedy done in 1964. She spent months creating dozens of sketches and paintings of the President.

In 1976, Elaine and William reunited and she took over the management for his studio. She continued to paint friends and other works inspired by her travels in addition to mentoring younger artists. Her paintings are a part of several major American museums such as the Guggenheim Museum, The Museum of Modern Art, National Art Gallery in Washington DC, two Presidential libraries, and more. Elaine de Kooning died on February 1, 1989 at the age of 71.

National Museum of Women in the Arts: Elaine de Kooning