M. J. Bender received an MFA in Poetry from the Warren Wilson Program for Writers. Prior to that she received a PhD in American Literature from Columbia University in New York. As an Associate Professor, she taught American Literature, African American Literature, and writing at Madonna University in Michigan. After learning American Sign Language, she taught English and literature to Deaf students in Michigan and New Jersey as well as work as an educational ASL interpreter. Her poems first appeared in ORIGIN as the featured poet when Cid Corman was editor. She has also been published by Mantis, Cimarron Review, RUNES, and the Center for Book Arts in New York, among others. She was born and raised in the Midwest. 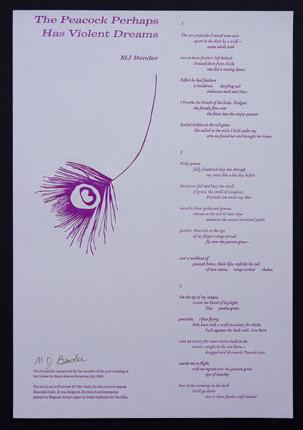 The Peacock Perhaps Has Violent Dreams