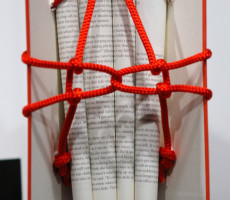 Queering the BibliObject presents works by contemporary lesbian, gay, bisexual, and transgender artists who explore the book as an object, removed from both the narrative function and cover-to-cover form of the traditional artist’s book.

The exhibition queries how the presence, absence, affect, and phenomenology of bibliobjects is heightened for LGBTQ individuals across cultures and chronologies, and considers how the treatment of the book as an object is a particularly queer artistic strategy.

A mix of assemblage, drawing, performance, photography, sculpture, and video, the works are organized around four formal and conceptual approaches: restricting access to the book object; repurposing bound, printed matter as material or medium; reclaiming the book’s context and content in order to reimagine narrative; and representing the self through, and/or relationship with, the book object.

Shelved between queer theory and thing theory, Queering the BibliObject reads between the lines of the conceptual and the material, the archived and the discarded, the personal and the historical. The exhibition poses that for LGBTQ individuals, our personal libraries or individual books often serve as containers of intellectual community and emotional connection, driving an impulse to curate, accumulate, anthropomorphize, and even fetishize the book object itself.

Queering the BibliObject is organized by independent curator John Chaich for the Center for Book Arts and will be accompanied by a full color catalogue featuring essays by Heather K. Love, Ph.D. (University of Pennsylvania) on affect and over-attachment and Scott Herring, Ph.D. (Indiana University Bloomington) on queer objecthood.John Chaich is an independent curator, designer, and writer based in Manhattan. Recent exhibitions include Mixed Messages: A(I)DS, Art, and Words, produced for Visual AIDS at LaMama La Galleria (New York) and Transformer Gallery (Washington DC), and Queer Threads: Crafting Identity & Community at the Leslie-Lohman Museum of Gay and Lesbian Art (New York), the Maryland Institute College of Art (Baltimore), and the Mills Gallery at the Boston Center for the Arts. With Todd Oldham, he is the co-editor of the forthcoming coffee table book Queer Threads (AMMO Books). For four years he curated multi-arts programming for the Museum of Contemporary Art Cleveland. He holds an MFA in Communications Design from Pratt Institute. 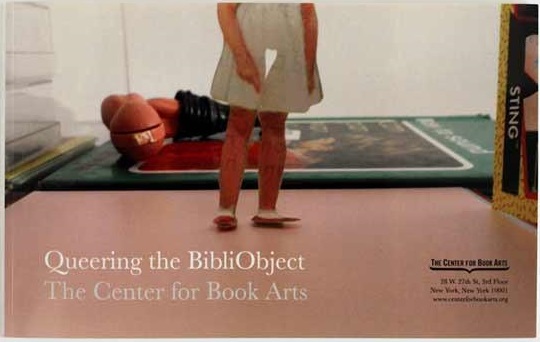