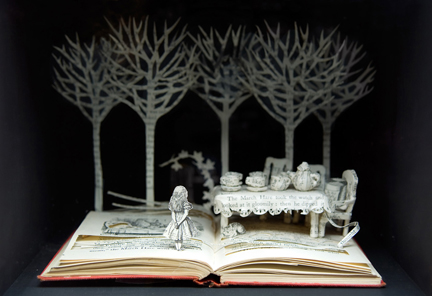 Su Blackwell is an artist and art director, working predominantly within the realm of paper. She has been named as the Center for Book Arts’ 2011 Bishop Faculty Fellow; this fall, she will teach a workshop and give a talk at the Center, in addition to presenting a survey of her work through this exhibition. Blackwell is known for her paper sculptures and installations based on fairy tales and folklore. In 2010, Su Blackwell Studios collaborated with Nicole Fahri, London, and worked on advertising campaigns for Cartier Paris, amongst others. Su exhibited the fine-art side of her practice at The Bronte Parsonage Museum in Haworth, West Yorskhire, England, and in her solo Show ‘Happily Ever After’ at Long and Ryle Gallery in London. Su is currently designing her first stage production of ‘The Snow Queen’ for the Rose Theatre in Kingston-upon-Thames, UK.

1/8
Your cart is empty.
Checkout