This book is available through our distributor, Oak Knoll Books.

This exhibition presents cancelled or otherwise prohibited exhibitions that now exist as publications or in other formats. These publications document the process and politics of cancelation, exist as an alternative manifestation of the exhibit, act as a critique of the forces that called for its cancelation, or they may be an admission and exposition of an ultimately productive failure. In the context of the Center for Book Arts, Canceled highlights the book form as a crucial means of disseminating documentation and information on a wide and accessible scale, potentially in ways that are more historically stable, and more effective, than the original exhibition would have been. Through utilizing printed matter, these artists and curators have found alternative routes by which the politics surrounding the presentation and creation of art become at least as relevant as the work itself. 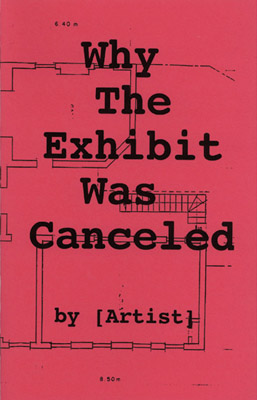