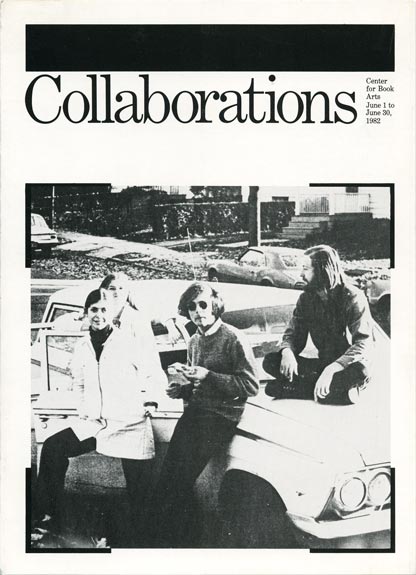 Norman B. Colp, Curator of Exhibits, said of the exhibit: “I invited Clive Phillpot to guest curate this show in order to provide the Center for Book Arts with a special perspective. From his vantage point as the Direcotr of the Library at the Museum of Modern Art, he has witnessed the proliferation of artists’ books in recent years.

With Collaborations, he set himself the task of a assembling a small scale exhibit that would provide the viewer, especially one with a limited exposure to these books, with an opportunity to examine how artists have made a book into an artwork. We are very pleased to be able to travel this special collection.”

Guest curator, Clive Phillpot, said in May of 1982 of Collaborations, “I had two principle aims in selecting books for this exhibition. The first was to present multiple, mass-produced books by artists, which were inexpensive and available in unlimited editions. At the same time I wanted to make sure that visitors to the exhibition could handle the books and that any book which took their fancy could still be purchased.

My second aim was in the nature of an experiment. I wanted to exhibit books which were the result of artistic collaboration between the sexes Would the result of such collaborations possess different characteristics than those attributable to books made by individual artists? Would the soup thicken when another ingredient was added?

In the event a search for books which were the result of collaboration between men and women yielded too few titles…I therefore extended my search to books upon which women or men had collaborated an to works by groups of people.

Extending the parameters of the search led me to more publications; collaboration is not uncommon among artists making books for mass-distribution – many different skills be employed and exhibited in the books medium. I was at this stage that I began to select, i.e., began to apply more subjective judgments to my accumulation of books. My own criteria for selection were not fully apparent to me until I had completed the process.

I subsequently realized that I had largely excluded awkward formats, funky bindings and anything artsy-crafty…I had focused principally upon what artists had done with the paperback – the most recent and ubiquitous physical form of the printed book. I also included books which, for the most part, had a professional finish to them; scrappy, thoughtless, amateurish publications were rejected.

I was concerned about diversity of content for an exhibition such as this one, but my selection on the basis of form, fortuitously preserved just this desired diversity of content. At the same time this almost arbitrary slice from the pie of books by artists produced a colorful bunch of books, diverse in size, type, and country of origin. While not claiming that this small exhibition can be said to represent the whole spectrum of multiple books and bookworks by artists, I think that it is also close to being exemplary. The books range from pure, powerful, even educational, documentation of collaboraiton…to collaborative artworks in book form – book works…

A closer examination of the books in the exhibition revels that many simply document activities in other media. However, it many also be apparent that documenting these activities in a book is sometimes the best or the only way to give from to them, and to communicate the full nature of the works to others…

Every book employs photography in some way. In a few cases the photographs are directly manipulated…while in a couple of cases photographs are accompanied by drawings…Most, but not all of the books, use words in consecution with pictures. The words are generally essential to one’s reading of the images…

But the attributes of the books mentioned above are not unique to collaborative works. Indeed it must be acknowledged that the results of conducting this experiment – of only considering books which were collaborations – were, perhaps inevitably, not susceptible to easy generalizations. The one tentative suggestion, rather than conclusion, that I would venture is that the majority of the works refer anyway from the self. They tend to focus on the other-whether another person or other people, or the environment in the broadest sense.

It might be said that multiple artworks in book form produced by the collaboration of a number of individuals is one of several challenges ot the mystique associated with the unique work of the unique individual.

I hope that there will be at least one work which will amuse or interest anyone who browses amongst this array of books.

Thought to be a Retarded: a Performance, 1982
Lerner & Turner

1/2
Your cart is empty.
Checkout