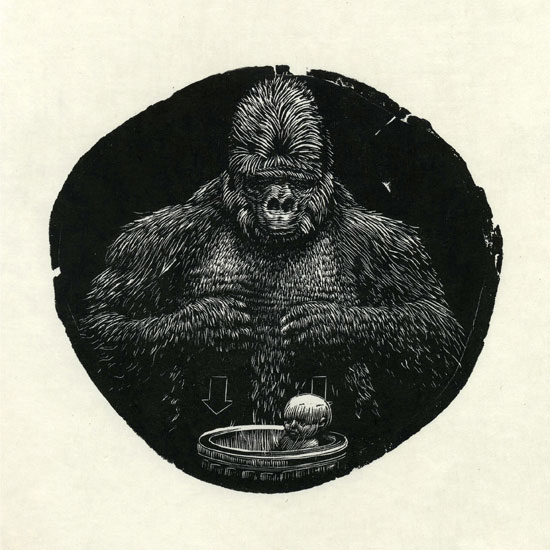 More Than Human is a sequence of over eighty wood engravings all cut from cross-sections of the same forty-year-old maple tree from a New Hampshire forest. The blocks were engraved by John Jacobsmeyer from 2002-2009. The image sequence represents an American Sign Language (ASL) interpretation of the soliloquy in James Dickey’s poem Sheep Child. In it, the half-human/half-sheep wonders at existence as he describes his conception, birth, brief life and ecstatic death. Each image conveys one or more ASL signs personified by a menagerie of characters, some human but mostly hybrids, monsters, and androids.

The wood engravings are based on the ASL interpretation of Sheep Child by Janice Nierstedt and Robert Keegan whose video will be on display. The printing took place at Jacob-Jingle-Heimer-Schmidt Press (JJHS Press) in Brooklyn by master printer Aaron Drew. Since 2002 portions of Jacobsmeyer’s More Than Human have been exhibited in venues as disparate as Shanghai’s Gallery 99 and Brooklyn’s Jack The Pelican Presents. This is the first time it will be exhibited in its entirety, in sequence, and with the original woodblocks.