Zemborain’s poems, translated by Rosa Alcalá and Mónica de la Torre, have also appeared in several English-language anthologies, including The Light of the City and Sea. An Anthology of Suffolk County Poetry (2006), and Corresponding Voices (2002); in the art catalogues Alessandro Twombly (2007) and Heidi McFall (2005); and in publications such as Ecopoetics, Rattapallas, The Brooklyn Rail, A Gathering of the Tribes, The Poetry Project Newsletter, and Mandorla. In addition, she has authored the book-length essay Gabriela Mistral. Una mujer sin rostro (2002).

Lila Zemborain is the director and editor of the Rebel Road series, and the curator of the KJCC Poetry Series at New York University, where she teaches creative writing in Spanish.  In 2006 she taught in the Summer Writing Program at Naropa University. 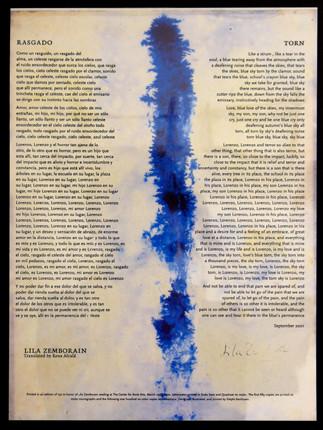