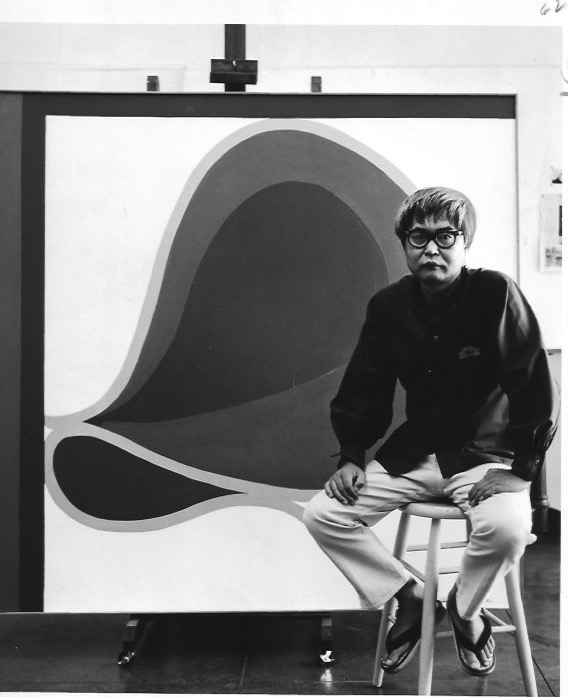 Matsumi Kanemitsu was born in Ogden, Utah on May 28,1922. At the age of four, Kanemitsu was sent to Ochimura, Japan, a suburb of Hiroshima, to be educated while he lived with his grandparents. There, his neighbor was his first drawing instructor. Kanemitsu finished his education in Japan and returned to the US in 1940 and worked in a copper-smelting plant in Nebraska. In June of 1941, Kanemitsu enlisted in the US army during World War II, but was detained by the military in December of the same year when the US went to war with Japan after the attack on Pearl Harbor. Kanemitsu was held under military detention at Fort Riley, Kansas with about 600 other Japanese-Americans. He was able to keep up his art practice through art supplies provided by the American Red Cross. In 1942, Kanemitsu was transferred to Fort Robinson, Nebraska where he received his first formal art training in Colorado Springs from Boardman Robinson during weekend leave. That same year, he volunteered for overseas duty in Europe and served as a non-combatant military hospital assistant in Germany and France from 1943-1945. While in Europe, Kanemitsu met artists such as Pablo Picasso, Henri Mattise, and others.

After being discharged from the military in 1946, Kanemitsu lived in Baltimore, Maryland and worked as a carpenter and mason while continuing to create art on the side. Kanemitsu went back to Europe in 1951 under the US G.I. Bill and studied with Fernand Léger before returning to the US the same year, settling in New York City, and enrolling at Art Students League. At Art Students League, Kanemitsu studied under Yasuo Kuniyosh, a Japanese painter who became his mentor and helped Kanemitsu keep in touch with his cultural heritage. Kanemitsu continued to work and develop his craft in New York City during the 1950s before moving to Los Angeles, California in 1965 where he would live for the rest of his life. In Los Angeles, Kanemitsu was an artist-in-residence at Chouinard Art Institute (1965-1973), worked in conjunction with the Ford Foundation, was part of the Otis Art Institute faculty (1973-1983), and produced several shows and exhibits. Kanemitsu is often described as a second generation Abstract Expressionist and continually worked to fuse Japanese ink painting, American Abstract Expressionism, and Pop art. Matsumi Kanemitsu died in 1992 at the age of 70.