Arkansas born and raised, and a resident of New York City for more than four decades, Patricia Spears Jones is a poet, educator, cultural activist, and anthologist. She is the author of A Lucent Fire: New & Selected Poems (2015), Painkiller (2010), Femme du Monde (2006), and The Weather That Kills (1995). She is also the author of five chapbooks, including Living in the Love Economy (2014).

Jones coedited the groundbreaking anthology Ordinary Women: An Anthology of New York City Women (1978) and THINK: Poems for Aretha Franklin’s Inauguration Day Hat (2009). Her poems are widely anthologized, most notably in Of Poetry and Protest: From Emmett Till to Trayvon Martin, BAX: Best American Experimental Writing, 2016, WORD: An Anthology by A Gathering of Tribes, African American Poetry: 250 Years of Struggle and Song, and Angles of Ascent: A Norton Anthology of Contemporary African American Poetry.

Jones’s poems have appeared in numerous print and online journals, including the New Yorker, the Brooklyn Rail, Persimmon Tree: An Online Magazine of the Arts by Women, Cutthroat Journal, and Plume. Her essays, blogs, colloquies, and interviews have been published in the collections Furious Flower: Seeding the Future of African American Poetry and The Whiskey of Our Discontent: Gwendolyn Brooks as Conscience and Change Agent; they have also appeared in print and online journals, including The Black Scholar, Bomb, Mosaic, the Harriet blog on poetryfoundation.org, Pangyrus, the Poetry Project Newsletter, the Rumpus, and the Writers Chronicle.

The Museum of Modern Art commissioned Jones’s poem “Lave” for the exhibition, Jacob Lawrence: The Migrations Series. Mabou Mines commissioned and premiered two plays by Jones: Mother, with music composed by Carter Burwell; and Song for New York: What Women Do When Men Sit Knitting, with music composed by Lisa Gutkin. She has performed with composer and violinist Jason Hwang, who has set several poems to music, as well as Ras Moshe Burnett and Luke Stewart.

Jones curated programs as program coordinator for The Poetry Project of St. Marks Church and developed the WORDS Sunday series in Brooklyn and guest curated programs for Center for Book Arts. She has read at many arts and literary venues, along with colleges and universities across the United States. Jones has juried contests, including Barrow Street and the James Laughlin Award for the Poetry Society of America. She has served on several panels for the Association of Writers and Writing Programs (AWP) and as keynote speaker to arts and literary organizations around the United States.

Jones is an emeritus fellow for Black Earth Institute and organizer of the American Poets Congress. 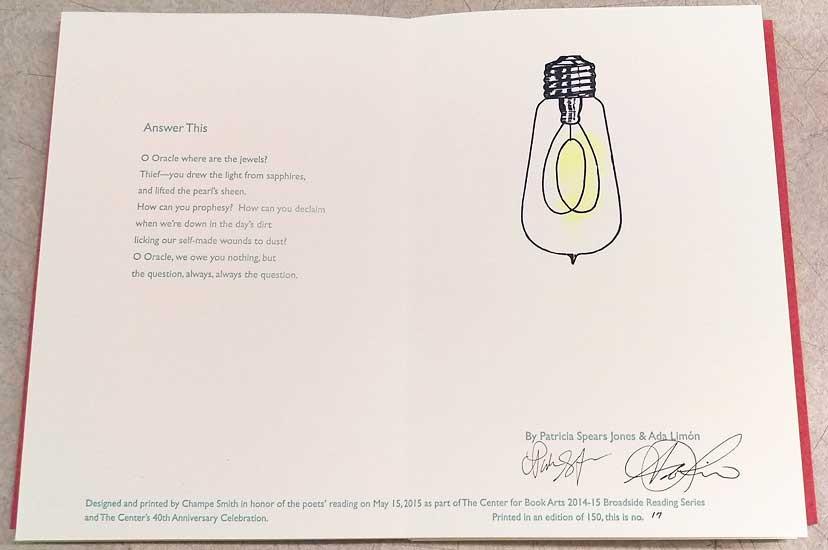 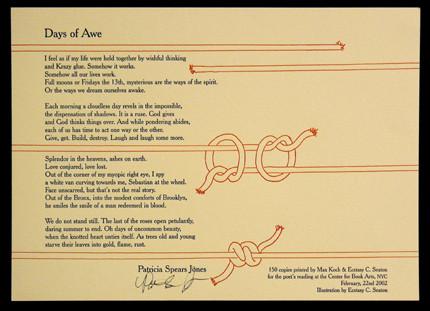