Born in Manhattan, poet and editor Rachel Wetzsteon received degrees from Yale University, Johns Hopkins University, and Columbia University. She made her home in the Morningside Heights neighborhood of Manhattan, which is the setting for many of her formally assured poems. Influenced by Charles Baudelaire, Soren Kierkegaard, and Philip Larkin, Wetzsteon infused her urban and emotional landscapes with a dry wit. As critic Adam Kirsch noted in his review of Sakura Park, “Wetzsteon’s poems are odes to sharpened senses, to possibilities held open, and to the city whose own sharp openness seems like a standing invitation.”

Wetzsteon published three collections of poetry during her lifetime: National Poetry Series winner The Other Stars (1994), Home and Away (1998), and Sakura Park (2006), as well as Influential Ghosts (2007), a critical study of poet W.H. Auden. A fourth collection of poetry, Silver Roses (2010), was published posthumously.

Wetzsteon’s honors include the American Academy of Arts and Letters’ Witter Bynner Prize for Poetry, as well as a grant from the Ingram Merrill Foundation. She taught at the 92nd Street Y’s Unterberg Poetry Center in New York and William Patterson University in New Jersey, and at the time of her death had recently joined The New Republic as their poetry editor. 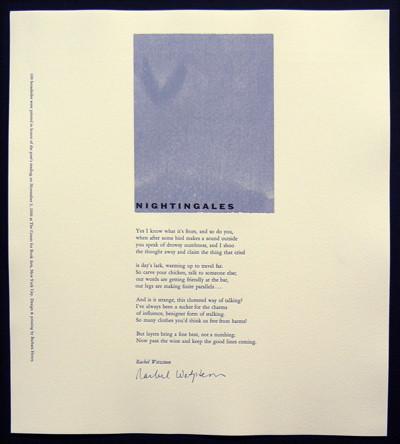