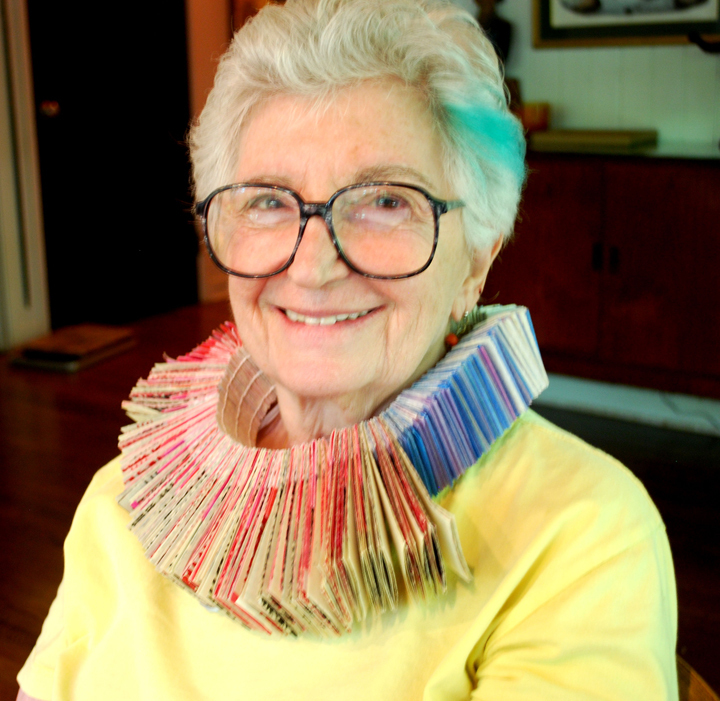 Shan Ellentuck died at her home in Roosevelt, NJ on September 17, 2020, at the age of 89. Shan attended Antioch from 1948 to 1951 where she studied Art and Creative Writing. In 1953 she traveled to France to marry her college sweetheart Bert Ellentuck, who was stationed in Verdun, France with the USA Corps of Engineers. In August 1953 they were reunited in America. Soon after they traveled to Raleigh, NC, where Bert was enrolled in the N.C. State College School of Architecture courtesy of the G I Bill. Soon after they arrived in Raleigh they had their first of four children. In order to supplement the meager stipend from the Army and the wages that Bert’s part-time employment brought in, Shan found work with a small advertising agency in Raleigh doing copy-writing and spot art. A second child arrived but Shan continued working.

In 1957 Bert graduated, found work in New Jersey and the family moved. Soon two more children arrived. In order to keep herself fully occupied Shan began to write and to illustrate children’s books. She had five or six books published to great acclaim. After the third and fourth children arrived, Shan decided that the family could use a steady income so she went to work as an artist and writer at an advertising agency in Princeton. When it became clear that she was not appreciated, she and a partner started their own advertising firm in Princeton called Ellentuck and Springer. Shan did all the creative and her partner, Jim Springer, handled the business affairs. They were enormously successful with such clients as the Wall Street Journal and TV Guide winning awards for their work.

Shan also served a term as President of the New York Creative Guild. Shan didn’t forget to work for her community — Member and President of the School Board, illustrator and writer for the community newspaper and general all around helper for friends and neighbors.

I will always remember Shan Ellentuck sitting with Hedi Kyle during a lunch break from a class at CBA, laughing and having an animated conversation. She probably brought treats to share with the class. She took so many classes, participated in the Edible Book event and attended the benefits year after year. The crazier the idea, the more she liked it. Shan did a lot of mail art, and made many books (this after writing and getting published a number of children’s books earlier in her life). Shan had energy for everything. She loved to entertain in her beautiful home in Roosevelt, cooking adventurous meals and then sending the recipes if you asked for them. She regularly attended the New Jersey Book Symposium, and she and her husband enjoyed the operas at the Glimmerglass Festival. Shan kept going, as if age could not stop her. Although she took a class with me at Penland, she was more my teacher than I was hers. What a great spirit she had. Bravo Shan. You wore that blue streak well!

It seems fitting that I am sitting in the Penland print studio as I write this…I am an older student now as she was when we first met, but believe me, there was never anything “older” about Shan Ellentuck. That streak of blue hair was like a calling card, indicating a young, creative, thoughtful, engaging, ever-curious spirit inside. Shan and Bert became dear friends over the years they took classes at Penland–Shan mostly in the printmaking and book arts studios and Bert in wood. She was one of the first students I met when I became director in 1998 and one I always looked forward to seeing each summer. Truly they helped to guide Penland over my 20 years with their questions and comments. Outside of Penland, we would meet in NYC to visit museums and eat in the many restaurants they enjoyed. No topic was off limits and conversations would always last longer than time permitted. Shan’s death leaves a big hole that laughter (and asking serious questions) can fill as we remember her!