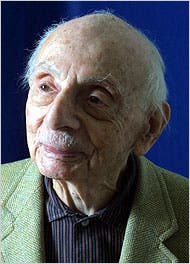 Stanley Kunitz was born in Worcester, Massachusetts on July 29, 1905. Kunitz earned his bachelor’s degree in 1926 and master’s in 1927, both from Harvard College. After graduating, Kunitz settled down in Connecticut and began writing for The Worcester Telegram followed by working for the H.W. Wilson company as an editor. He worked at the Wilson company until 1943 when he was drafted into the US Army during World War II despite putting in a request for conscientious objector status. During the war, he worked as an editor and writer for the Army in North Carolina. Kunitz taught at Bennington College in Vermont after the war in addition to teaching later at Columbia, Yale, Princeton, Rutgers, and the University of Washington.

His first book of poetry, Intellectual Things, was published in 1930. From then on, Kunitz continued to write poetry and publish his work up until a few years before his death. Kunitz acknowledged that during the early part of his career, he had little knowledge of the world and as a result, “[e]arly poetry is much more likely to be abstract because of the poverty of experience.” While Kunitz might have lacked life experience when he first started publishing his work, he certainly made up for it through an abundance of love for language and the craft.

Kunitz dealt with many deep themes in his poems including the pervasive themes of life, death, “rebirth, the quest, and the night journey (or descent into the underworld).” Taking on these daunting themes gave Kunitz the reputation of being a risk-taker in his field. One influence for his work in the theme of life and death was the suicide of his father, six weeks before Kunitz’s birth. Another unique element about Kunitz’s poetry is that while his style of work changed over his lifetimes, method in which he wrote the poems did not. He always started with a pen and paper before writing several drafts and eventually the final copy on a manual typewriter. Kunitz also destroyed anything that wasn’t a finished product because he didn’t want unfinished or unsatisfactory work to be published after he died and was not there to check it.

Kunitz received several prestigious honors throughout his life including a senior fellowship from the National Endowment for the Arts, being named the State Poet of New York, United States Poet Laureate, and several others. Stanley Kunitz died on May 14, 2006 at the age of 100.