Thomas Glave was born in the Bronx and grew up there and in Kingston, Jamaica. A graduate of Bowdoin College and Brown University, Glave traveled as a Fulbright Scholar to Jamaica, where he studied Jamaican historiography and Caribbean intellectual and literary traditions.

While in Jamaica, Glave worked on issues of social justice and helped found the Jamaica Forum for Lesbians, All-Sexuals, and Gays (J-FLAG). Glave is the author of the collection Whose Song? and Other Stories, which was nominated by the American Library Association for their Best Gay/Lesbian Book of the Year award and by the Quality Paperback Book Club for their Violet Quill/Best New Gay/Lesbian Fiction Award. His essay collection Words To Our Now: Imagination and Dissent was published in 2005 by the University of Minnesota Press. His edited anthology, Our Caribbean: A Gathering of Lesbian and Gay Writing from the Antilles, will be published by Duke University Press in 2006.

The recipient of numerous fellowships and awards, including an O. Henry Prize for fiction and fellowships from the National Endowment for the Arts and the Fine Arts Center in Provincetown, Glave was named a Writer on the Verge by The Village Voice in 2000. 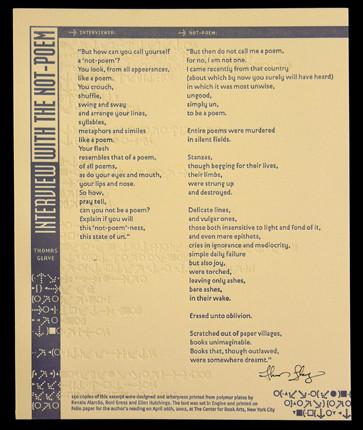 Interview With the Not Poem