Carla Harryman is a poet, experimental prose writer, essayist, performance writer and collaborator in multi-disciplinary performance. She is known for her boundary breaking investigations of genre, non/narrative poetics, and text-based performance that begin in early publications such as Under the Bridge (This Press, 1980) and two volumes of selected writings Animal Instincts: Prose Plays and Essays (This Press, 1989) and There Never Was a Rose without a Thorn (City Lights, 1995).  She is the recipient of numerous awards including an artist award in poetry from the Foundation of Contemporary Art, New York; a grant (with Erling Wald) from Opera America: Next Stage; an NEA Consortium Playwright Commission; and an Alexander Gerbode Foundation award in poetry. Her work has been translated into many languages, including multiple publications in French, and her essays, poetry, prose, and plays have been represented in over thirty national and international anthologies. In 2018 her work was the focus of a two-day Poets and Critics symposium at Université Paris 7 Denis Diderot.

The influence of improvised music, electronic sampling, and collaborative practices animate her recent works.  Publications from 2018 include the two volumes Sue in Berlin and Sue á Berlin (trans. Sabine Huynh), a collection of performance writings and poet’s theater plays composed between 2001-2015 and released by PURH “To Series” in separate English and French volumes. In an interview for Décharge the author describes the work as “first an event of listening, tracking itself on the more abstract, musical plane, which carries the figurative, fanciful, philosophical, playful, drastic, and political aspects of its non/narrative.” A score for speaking voices and manual typewriters used as musical instruments was also published in a bi-lingual edition in 2018, byjoca seria, as L’Impromptu de Hannah/Hannah Cut In. Hannah Cut In premiered in performance at University Art Museum, Berkeley in 2017.

Harryman’s Poets Theater, interdisciplinary, and bi-lingual performances have been presented nationally and internationally. In 2012 she performed (with pianist Magda Mayas) Occupying Theodor W. Adorno’s “Music and New Music,” a Re-performance, as the closing keynote of dOCUMENTA 13’s What Is Thinking program in Kassel, Germany. The re-performance of Adorno’s 1959 lecture constructed a quiet yet enlivening surface, creating a “noise” informed by cultural and gender difference as well the passing of time and the present historical moment. This is one of many recent performances inspired by music, speaking voice, and text collaborations with composer and musician Jon Raskin. In 2012, she and Raskin published Open Box (on the Tzadik label), a CD inspired by her long-poem Open Box (Belladonna, 2006). Their current collaboration is Gardener of Stars, an Opera, a work for micro-electronics, prepared piano, and speaking voices; the opera’s score is an adaptation of Harryman’s experimental novel Gardener of Stars (Atelos, 2001), which she has described as “an exploration of the paradise and wastelands of utopian desire.”

A current essay project focuses on arenas of hope and negativity in a durational project, “Letters Not about Hope.” This project draws from Viktor Shklovsky’s experimental epistolary work Zoo: or Letters Not about Love and philosopher Ernst Bloch’s The Principle of Hope as points of departure for creative essays that pivot, divergently, around the concepts of concrete utopia. A manifestation of this project is Artifact of Hope, published in Kenning Edition’s Ordinance Series in 2017. Of this work, reviewer Piotr Gwiazda comments, “As she turns philosophy into poetry, “thinking” into “making,” [Harryman] crosses many boundaries: linguistic, cultural, national, ideological, generic, disciplinary. The point for her is to retrieve something useful, even provisionally so, from the work, to make the encounter active, dialogic, even dialectical…”

Carla Harryman was born in Southern California in 1952.  In the mid-1970s she left Los Angeles for San Francisco, where she became a founding figure of the Bay Area language writing and a co-founder of The San Francisco Bay Area Poets Theater, a collective project directed by Nick Robinson and Eileen Corder that ran from 1979- 1986. In 1995, she moved from the Bay Area to Detroit. She currently divides her time between the Detroit area and Ypsilanti, where she serves as Professor in the Department of English at Eastern Michigan University.  She also serves on the MFA summer faculty of the Milton Avery School of the Arts at Bard College. 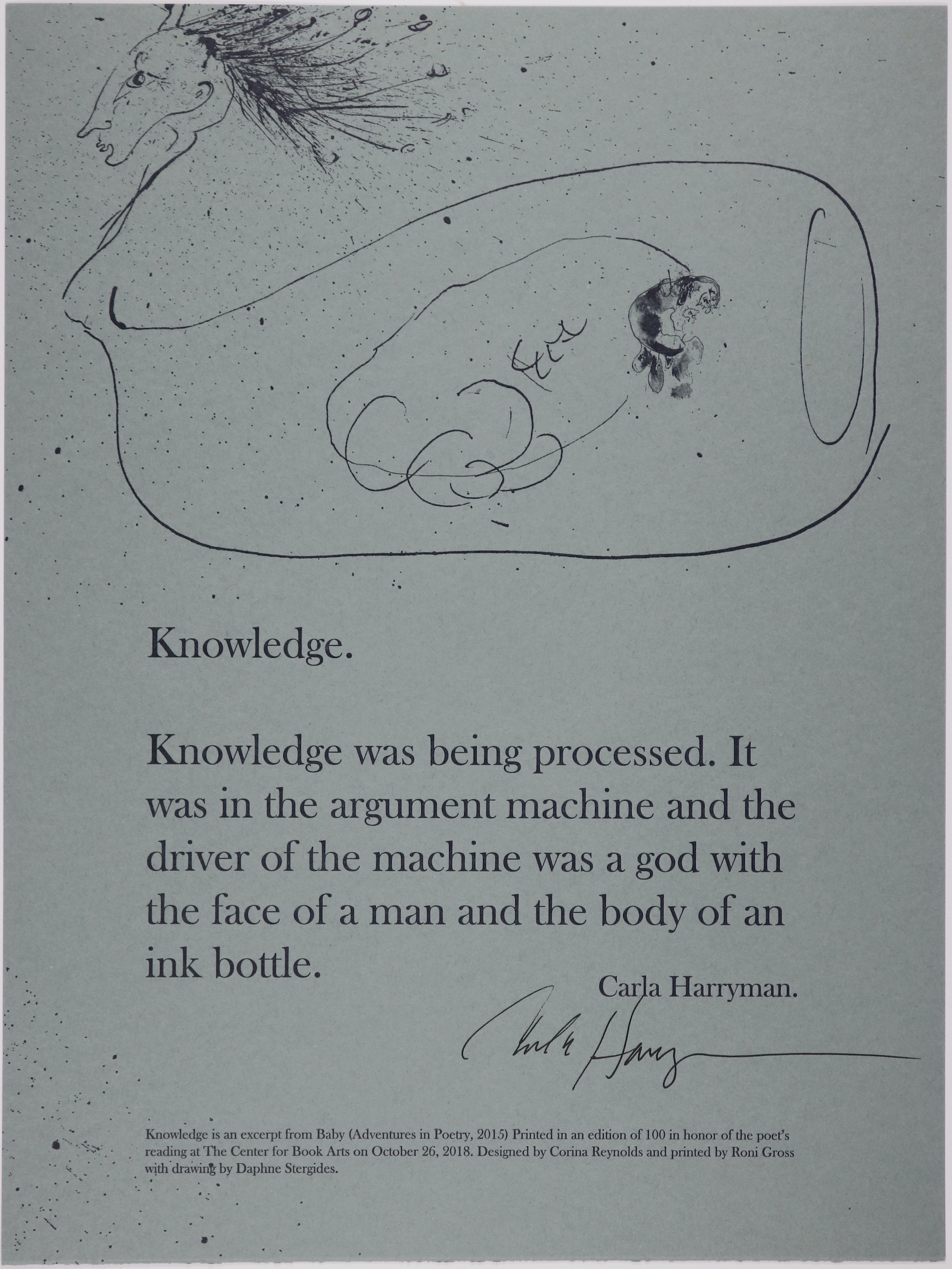