Deborah Flanagan’s poems have appeared in publications including The Gettysburg Review, Ploughshares, Pleiades, The Southern Review, and Drunken Boat, and AGNI recently nominated her for a Pushcart Prize. She served as Director of Development for the Academy of American Poets before establishing the Center for True Health. In addition to working with patients at NYU’s Langone Medical Center, she has appeared as a wellness expert on national television, in print, and online. Deborah lives with her husband in New York City. 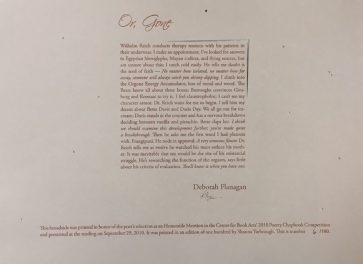