Jeff Clark (born 1971) is an American poet and book designer. Biography Clark grew up in southern California. He studied at UC Davis and completed a Master of Fine Arts in poetry at the Iowa Writer’s Workshop. At Davis, Clark drummed for the band Buick, whose album Sweatertongue was released by Lather Records in 1992. He also drummed for the Popealopes, and is featured on their album Slowest Eye, released by Italy’s Helter Skelter Records. In 1995, he graduated from the Iowa workshop and moved to San Francisco, where he wrote poetry and edited a zine, Faucheuse. He also worked for Wilsted & Taylor, a book design studio in Oakland, California. Writing Clark’s first book, The Little Door Slides Back, was a 1996 winner of the National Poetry Series award. It was published by Sun and Moon Press in 1997, and reprinted in 2004 by Farrar, Straus and Giroux. John Yau, writing in Boston Review, said that Clark evoked “a fragile, interior world largely lit by the moon, cheap paperbacks, and noir movies, a place in which predicaments and paradoxes abound.” Farrar Straus Giroux also published Clark’s second collection, Music and Suicide, which received the 2004 James Laughlin Award. John Beer in Chicago Review said “its ambition is more erotic than programmatic, which makes it hard to place in a critical landscape dominated by twin towers of linguistic materialism and idle taste-mongering. But if this erotic ambition is one more aspect of Clark’s untimeliness, that untimeliness may allow him to escape mere datedness to disclose a new poetic future for us all.” In 2000, German artist Cosima von Bonin created an installation entitled The Little Door Slides Back for the Kunstverein Braunschweig. Also in 2000, Z Press published Sun On 6, which was printed by Leslie Miller at The Grenfell Press. In addition to Clark’s poem, it contains Jasper Johns’ first linocut. In June 2006, Clark and Geoffrey G. O’Brien released 2A, an experimental collaboration in poetry. In 2009, Turtle Point Press published Ruins, a limited edition book that Clark wrote, illustrated, and designed.) 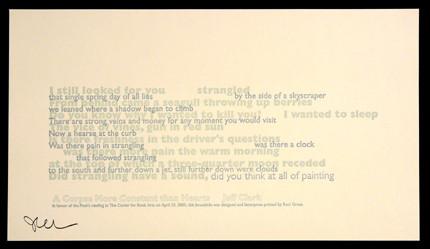 A Corpse More Constant than Hearts