Teresa Leo is the author of two books of poetry, Bloom in Reverse (University of Pittsburgh Press, 2014) and The Halo Rule (Elixir Press, 2008), winner of the Elixir Press Editors’ Prize, and also a broadside,”After Twelve Months, Someone Tells Me It’s Time to Join the Living” (The Center for Book Arts, 2009). Her poetry and essays have appeared in The American Poetry Review, Poetry, Ploughshares, Women’s Review of Books, New Orleans Review, Barrow Street, The Florida Review, Painted Bride Quarterly, 5 AM, Literal Latté, Poetry Daily, Verse Daily, Mooring Against the Tide: Writing Fiction and Poetry (Prentice Hall, 2005), the anthology Whatever It Takes: Women on Women’s Sport (Farrar, Straus and Giroux, 1999), and elsewhere. She has been a resident at the Virginia Center for the Creative Arts, the Blue Mountain Center, and the Vermont Studio Center, and her awards include a Poetry Fellowship from the Pew Fellowships in the Arts, an Emerging Artist Award in Creative Nonfiction from the Leeway Foundation, two Individual Artist’s Fellowships from the Pennsylvania Council on the Arts, six Pushcart Prize nominations, and the Richard Peterson Poetry Prize from Crab Orchard Review. 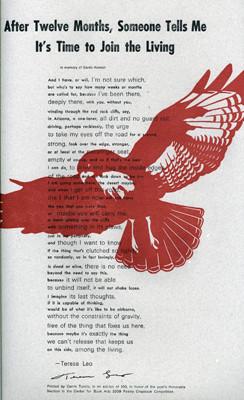 After Twelve Months, Someone Tells Me It’s Time to Join the Living