Tony Towle was born in New York in 1939 and has lived there most of his life, at present in Tribeca with actress Diane Tyler. He has two grown children, Scott and Rachel. Towle began writing poetry in 1960 (see Memoir 1960-1963, in Publications) and became associated with the New York School of Poetry three years later, when he took poetry workshops with Kenneth Koch and Frank O’Hara. His first major collection, North, was the Frank O’Hara Award for 1970 and published by Columbia University Press. He has received fellowships from the National Endowment for the Arts, the New York State Council on the Arts, the Poets Foundation, and the Ingram Merrill Foundation, among other prizes and honors. 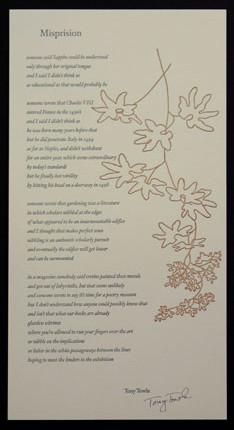